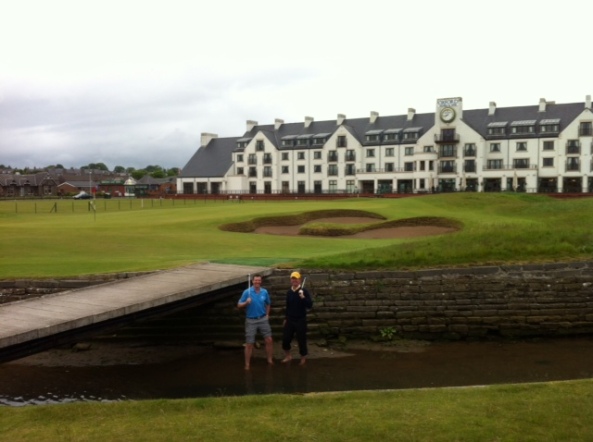 For Jean van de Velde the last 3 holes at Carnoustie are memorable for all the wrong reasons. Coming to the 18th hole on the last day with a three stroke lead all he needed to do was make a double bogey or better to be the 1999 Open Champion.

An errant drive, followed by a shot which hit the grandstand and another which landed in the burn in front of the green saw his lead evaporate in the space of 10 painful minutes. An up and down from the greenside bunker for a triple bogey 7 saw him into a playoff where he lost to Paul Lawrie.

Dave and Gary on the other hand found these holes to be memorable for all the right reasons. The 16th hole is a 220 metre par 3 with a relatively small raised green with run off on both sides. The 17th hole is known as “Island” with a burn running through the hole twice creating an island landing area and requiring pin point precision off the tee. The famous 18th is a long par 4 with a treacherous burn that almost abuts the edge of the green.

Dave’s par, par, par finish was complemented by Gary’s par, birdie, birdie finish with putts of 3 feet on each of the last two holes. Need we say more?? Easy game…

Carnoustie is a commercial operation with 54 holes of golf located near but not on the water and has a very steady stream of visitors. The staff were genuinely friendly and we felt at home from our initial interaction with the starter through to the pro shop staff.

We were paired with two Indian visitors who thankfully had caddies (we listened in quietly on which direction to hit the ball…).

The first tee shot at Carnoustie is daunting and sets the scene for the day. A water hazard running down the left hand side of the first fairway was the first of seven holes that had a similar challenge. Fortunately we are not big hookers so this was not a problem for us.

The greens are large and fast which we enjoyed once we got the pace sorted. Having said that we still managed to 3 putt a number of holes early in the round.

The heavily bunkered fairways we found to be fair and generally visible from the tee. It was a contrast to Royal Lytham and Royal Aberdeen where there was a greater uncertainty about where one could safely hit the ball.

Fairways were generally flat and in good condition even though they play over 40,000 rounds a year.

Our Indian friends used all of the course and ensured a “relaxing” pace was the norm with minimal concern about our speed of play. To be honest having 3 practice swings per shot (including putts and bunker shots) is probably a bit much. The four and a half hour round was at least an hour longer than what we have become used to.

Admittedly we did not experience Carnoustie with the teeth that it is renowned for. With only a one club wind at most we did not feel as intimidated as we had alluded to in our blog yesterday.

“Hogans Alley” is a long par 5 with out of bounds extending down the left hand side. Bunkers guard the middle of the fairway. During an Open Championship Ben Hogan threaded this very narrow fairway on all four days to set up the hole perfectly. David did likewise with a fantastic drive that found the “Alley”.

Bunkers and burns offset the relatively flat terrain and require some thought to negotiate without peril. In fact neither of us hit into the water all day and our lost ball count collectively was one.

For a moment we thought we were good golfers.

Post game we knew what we had to do. We then headed to the land of Jean van de Velde with a quick trip to the 18th hole burn, socks and shoes off with wedges in hand. Fiona from the pro shop kindly took a number of photos of us while other golfers looked on with bemusement.

St Andrews was our next stop and is located 45 minutes down the road – easy!

Aslar House is our great little B & B located in the centre of St Andrews, a short walk to the first tee of the Old Course. Stan, Mary and Katherine were there to greet us when we arrived at 9:30pm.

Shot of the day

Gary’s rescue club on the 18th hole, over the burn to 3 feet for a grandstand finish – birdie!

A good nights sleep and ready to tackle Kingsbarns in the morning. Stay tuned…

2 comments on “Carnoustie – the toughest 3 finishing holes in golf. Really?”