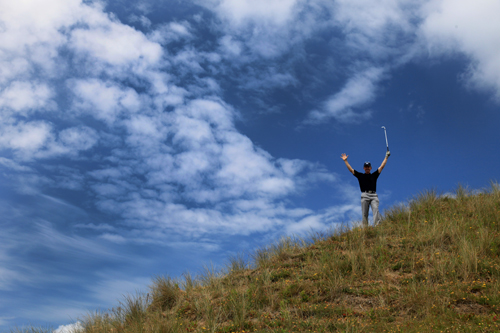 Flybe is an interesting name for an airline. But they got us safely from Glasgow to Belfast. As we came into land we saw the shipyards that were famous for building the Titanic on one side and green, green, green fields on the other. Our first foray into Northern Ireland was a splash of the color green.

We were on a mission. After picking up our hire car we drove speedily north (but safely) to County Antrim and the home of Bushmills Whisky and some very special golf courses. A quick 5 minute stop to check in at the Bushmills Inn (thanks to Zoe and staff for their warm hospitality) and then off to see our friends John and Gillian Bamber (and their lovely daugher Jessica). Gary had the pleasure of meeting and playing with John and Gillian in Australia a year ago so it was great to catch up again.

The mission we were on was two fold – Gary was keen to capture photos of Royal Portrush (where John was former captain) and David was keen to play a few holes in advance of the next mornings round.

The sun was out as we headed to Royal Portrush and Gary spent an hour and a half with John running up and down sand dunes capturing some great images of this very special golf course. With sunsetat 10am Dave and Gary missed dinner (again…) however, with great persuasive skills managed to convince the Bushmills staff to put something together. A quick post run/game drink with John and we retired to our rooms for the standard 5 hours sleep (not enough) before we teed it up at 7:30am.

We have become accustomed to grandstands greeting us where we play (no crowds though if you remember…). Royal Portrush was no different. The Irish Open is being hosted in little over 2 weeks at here and preparations were in full swing. John is the tournament director so gave us an overview of the details as we played the course.

Speed of play is right in Northern Ireland. In 2 hours 55 minutes we “casually” played 18 holes aware of John’s pressing television interview at 11:30am.

Royal Portrush (Dunluce Course) deserves its top 14 world ranking and is another example of the fine work of Harry Colt. His influence spreads far and wide. It is described by many as the “fairest links golf experience” with good shots rewarded and bad shots punished.

The course was in mint condition ahead of the Irish Open. Fortunately our early start meant the prevailing winds were docile however both of us can imagine the challenges that presents when the wind is blowing.

In true links fashion the green surrounds were heavily undulated and firm and fast.

Padraig Harrington’s favorite hole is “Calamity” – a long and testing par 3 played over a deep ravine to a green perched above the tee over 200 yards away. David made a great par here that he will remember for a long time.

Darren Clark who lives 5 minutes away and is a member, frequents the club on an almost daily basis in between tournaments. Combined with Rory McIlroy who shot 61 around here (11 under) when he was 16 and Graham McDowell the course is flush with majors winners who are members and love to play this gem of a course.

Dunluce Castle is located 5 minutes drive from Portrush. This castle is perched up high on the edge of the water with commanding views over to Scotland. It is 600 years old and fits perfectly into the landscape. Well almost perfectly.

History has it that one fine evening part of the kitchen next to the cliff face collapsed into the sea after which the wife of the owner refused to live in the castle any longer. Only a kitchen boy survived as he was sitting in the corner furthest from the cliff edge.

Moral of the story – stay away from the kitchen!

Around the corner lies Portstewart – with 54 holes of golf. The championship course is The Strand and begins dramatically with a downhill sweeping par 4. Breathtaking views await on most holes and the dramatic dunes frame the holes perfectly. And this is just on the first nine! Portstewart is not as well known as its illustrious neighbour yet well worth a visit.

Shot of the Day

As the title of today’s blog would suggest to get up and down from a 100 foot sand dune is impressive. David found himself on the left hand side of the 5th hole with a great view of the world but not much else! He was literally 100 feet higher than Gary on the fairway. With great skill he hit a wedge onto the green and after taking 5 minutes to climb down the dune proceeded to hole his 30 foot regulation par putt. Gary on the other hand played the hole the conventional way and walked off with a bogey! Go figure…

After our round at Portstewart we drove 2.5 hours to Royal County Down – an amazingly beautiful golf course (ranked number 4 in the world). The weather was absolutely glorious so Gary was out and about running up and down sand dunes (getting fitter by the day) capturing some amazing photos while David practiced. Overnight at the equally impressive Slieve Donard hotel (which is next door to the course) in preparation for the day ahead on one of the world’s great courses. Stay tuned…