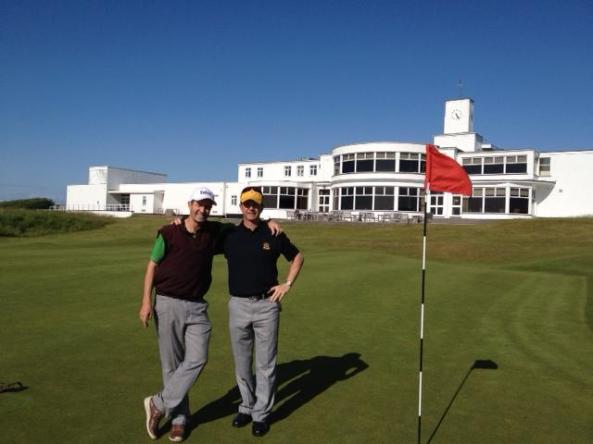 After the wetness of yesterday, the last thing we wanted was another damp day. Our clothes and shoes dried out quite well overnight so it was with fear that we opened the curtains to reveal what we would be facing weather wise…

“Here comes the sun” was very apt and the clear blue skies, slight breeze and crisp temperature were the perfect combination for a game at Royal Birkdale.

This course has hosted many memorable Open Championships and boasts amongst its previous winners Tiger Woods, Mark O’Meara, Lee Trevino and our very own home grown Ian Baker-Finch. The course is located a short 5 minute drive from the centre of the seaside town of Southport.

The Birkdale sand dunes where the course is laid out, reminds us of the topography of Barnbougle Dunes, the course built throughout the seaside dunes in Bridport Tasmania.

Royal Birkdale is very challenging even without the wind as fairway bunkering is prevalent and penal on most holes.

Hitting the ball out required use of a lob wedge to clear their steep faces.

It was peculiar to have the par 5s rated 1, 3, 5 and 10 in difficulty but after playing them we could see why.

The fairways were often visible however the clever positioning of the bunkers actually fools you in your club selection off the tee as you often have more fairway than you may think and sometimes the opposite was true. All in all this golf course is extraordinary and deserves its top 30 status in the world.

We are of the view that Peter Thomson, who was an Open winner here in 1954 and 1965, got his fairway bunker design inspiration from Birkdale. His courses feature many similar designs to what we encountered.

The subtleties of the greens made them trickier than most we have played. There were a number of three putts. We sank no ‘bombs’ today.

However, alas, there was one golfing highlight. Gary nestled his 4 iron second shot to 15 feet (‘shot of the day’) on the par 5 18th hole and yes, sunk the putt for Eagle! After filming his exuberance on the green, I think everyone he knows in Australia has now been informed. It was a picture perfect series of three shots.

A good hotel is half the battle when you are on the move like we are.

The Vincent hotel in Southport has been our home for the last two nights and we both are enjoying the features of this boutique hotel which we would highly recommend to anyone who visits Southport. Conveniently located on Lord Street, it is near the restaurants, shops and cafes.

Gary managed to photograph Royal Birkdale at 6am today, play golf and then also make the advance one hour trek to Lytham to get some evening course shots. He likely walked 25 km today between courses and we are writing this blog as we eat a kebab as no restaurants or pubs are still serving food at 11pm at night.

Weather tomorrow was supposed to be wet but we are hoping it will clear as we take on Lytham only weeks before they host the Open in July. The grandstands are all up and we may have to hit off a mat that we carry around with us. Stay tuned.